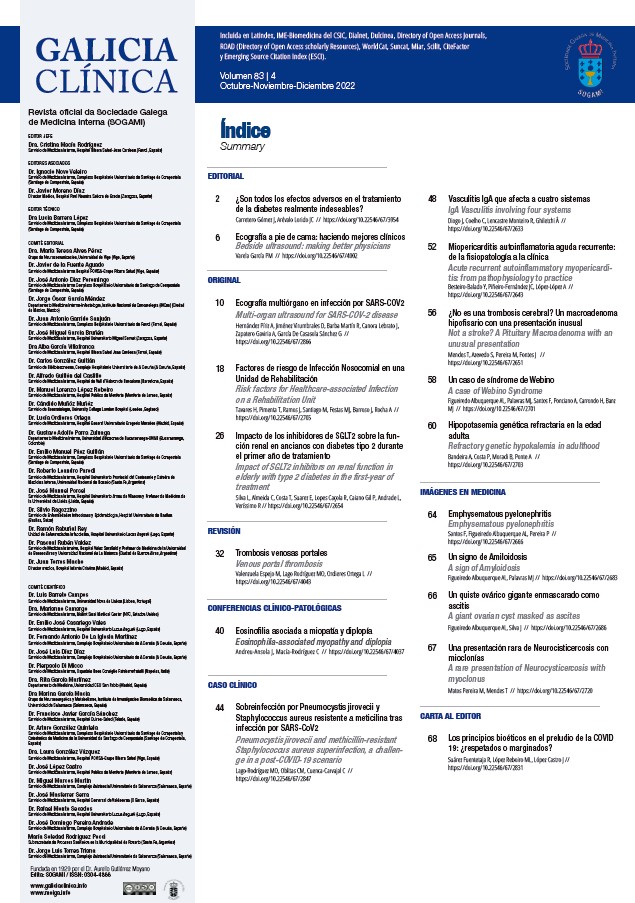 A 56-year-old man, diabetic and hypertensive, who came to the emergency
department with a one-week evolution of polakiuria and pneumaturia, under
Ciprofloxacin for suspected urinary tract infection. On objective examination, he presented hemodynamically stable, apyretic, with pain in the right flank and in the right iliac fossa, without signs of peritoneal irritation. Murphy's sign was present on the right. Analytically with elevation of inflamatory parameters and slight elevation of transaminases. Renal function was preserved. An Uro-CT was performed showing evidence of marked pyelo-kalicial dilatation of the right kidney, with marked reduction in parenchymal thickness and significant delay in the concentration of excretion of the contrast product, with the presence of air-fluid level in the pelvis, in the context of an abscessed emphysematous pyelonephritis. Cultures were taken and broad-spectrum antibiotic therapy was started. Percutaneous ultrasound-guided nephrostomy was performed. Microbiological study was negative. With clinical improvement under prescribed antibiotic therapy. Subsequently, renal scintigram was performed and showed abcense of function of the right kidney. The patient was proposed for a total right nephrectomy by laparoscopic approach. Discussion: Emphysematous pyelonephritis is a rare infection of the renal parenchyma characterized by gas production, usually by gram-negative, facultatively anaerobic microorganisms. Of the cases described, 60% to 70% are associated with poorly controlled diabetes mellitus. Although the presentation is often similar to uncomplicated pyelonephritis, the clinical course is severe with a high early mortality rate, about 75% with medical treatment alone and 45% with medical and surgical treatment.