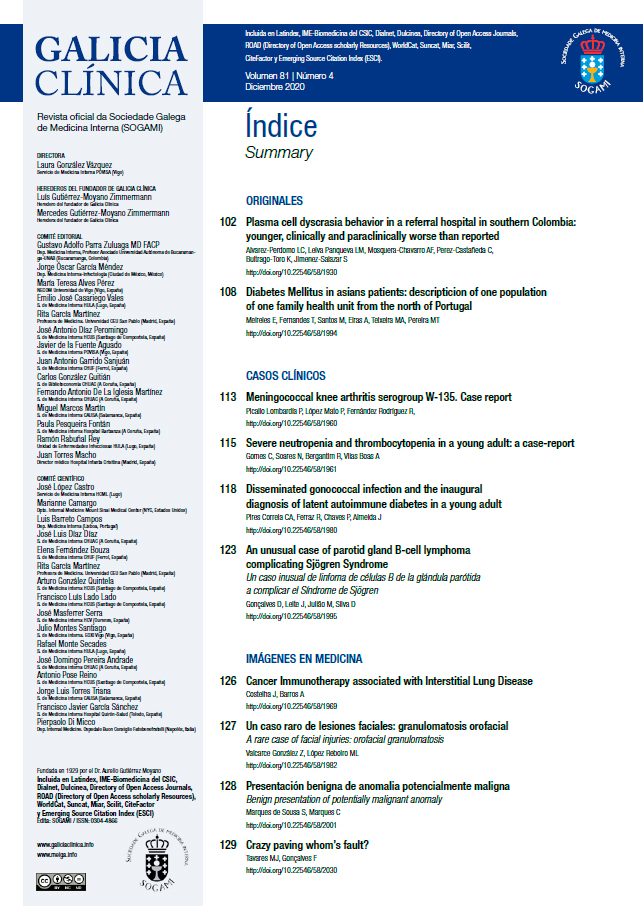 Objectives: Plasma cell dyscrasias are diseases characterized by clonal proliferation and accumulation of cells producing monoclonal immunoglobulins. These diseases have not been studied in our region and we dont know if their behavior is similar to that reported in the literature. Thats why we evaluated multiple characteristics in southern Colombia. Methods: analytical cross-sectional study of patients with confirmed diagnosis of a plasma cell dyscrasias were included. Results: 60 patients included in our study, 65% were men, with an average age of 58.8 years (CI 96% 55.8 - 61.93). Bone pain was the most frequent symptom (88%). The most frequent dyscrasia was multiple myeloma and in these patients we found a high percentage of hemoglobin less than 10 mg/dl, creatinine greater than 2 mg/dl and serum calcium higher than 11 mg/dl (77%, 38% and 37 %, respectively). Half of the patients had a time course of symptoms greater than 4 months and 43% had plasma cells in bone marrow greater than 60%. 65% of patients had elevated levels of serum B2-microglobulin (> 5.5 mg/L) and in-hospital mortality was 15%. We found a statistically significant association between mortality and gender (PR 6.5) and between mortality and hemoglobin (p = 0.039). Conclusion: Patients with plasma cell dyscrasia in southern Colombia are younger, consult late, in an advanced stage of their disease, with greater renal damage, hypercalcemia and anemia than reported in the literature, also a high tumor burden due to high plasma cell infiltration into bone marrow and high values of serum B2-microglobulin.